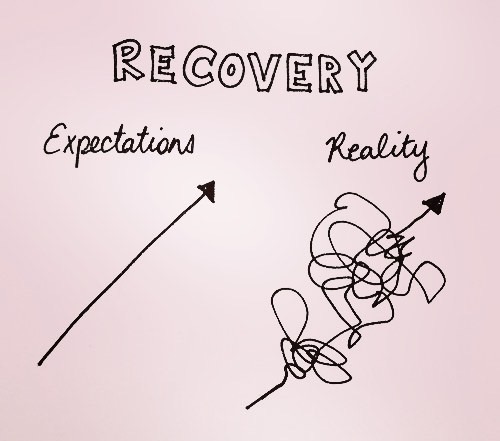 So the blog’s been a bit quiet lately, right? Sorry about that – I know a few people have been wondering / asking if things are ok. I guess the downside of committing to writing about the journey is that you actually need to live up to that promise, even when sometimes all you want to really do is run away and hide in your cave.

Well the truth is, that’s what I’ve been doing – hiding in my cave. And it’s not been pretty.

The reality I wasn’t prepared for

So what kicked it off? When I was admitted into hospital, my health deteriorated so fast that by the time I actually went into surgery I was a physical mess. And when I came out I was totally knocked back by the state of my body. WTF? Sure, I’d lost the use of my left arm and was struggling to walk, but I was strong, my muscles were solid, every Neurologist who came and did their checks on me commented on how strong I was… I could leg press 200kg for god’s sake, I was squatting my body weight, doing pull-ups in the gym, and I’d run 5k round Westerpark a few days before with my trainer, Glenn.

Once the damn lung drain came out and I was finally able to get up on my feet I could walk – great – but what the hell happened to my body? My face is five times its normal size, I look like a sodding hamster, I have tyres of flab around my middle and my muscle has gone?!

The lightbulb moment came one evening when I bent down to put my shoes into the bottom of my cupboard in hospital; once my legs bent to about 30 degrees, I just didn’t have the strength in my quads to push myself back up and I just collapsed onto my knees. I was stuck in a heap on the floor. How on earth was I going to get up? I sure as hell wasn’t gonna call a nurse. I had to figure this out for myself. I’m not a damn invalid. I flipped over onto my arse, wriggled over to the chair, used my right arm to heave myself up into the chair, and sat there in dark realisation of exactly what this bastard disease has done to my body.

It’s taking over my life

In my usual fashion of needing to understand the detail, I spent most of that night lying awake thinking about it, and eventually emailed a family friend, Sean. Sean is a legend –  not only is he an Anaesthetist on the Dorset Air Ambulance team, he’s also a straight talker, who I knew would give me the detail I wanted in a way I could understand it. The (edited version) went something like this:

Me: I never felt like this after my breast surgery? Is it a different kind of anaesthetic? In my (simple) mind, muscle mass/strength is a physical, tangible thing, it’s not electrical wiring like the mobility issue. So for it to just disappear seems weird – without use over a long period of time, sure, but this feels like just days, as I was still climbing the stairs a week ago? If I know it’s gone and needs to be rebuilt from scratch, fine; I can set my expectations there and give myself some targets to aim for – one step, one flight, one squat…But if it’s a side effect of the anaesthetic, is there more you can help me understand?

Sean: It’s not the Anaesthetic. Whatever they used it will have, to a large extent, been out of your system by day 3. It’s a combination of things. Muscle mass starts to go within 24-48 hours of reduced activity. Seriously. In the 80’s the Americans put a bunch of college athletes into bed for a week. They were turned and moved by assistants and didn’t get up for anything. Their diet was normal, and they had no underlying illness. They lost 30-50% of their strength and stamina. In just one week. Throw in a period of being unwell, changed modes of activity in part resulting from the left-sidedness of things, changes in diet, reduced activity, various ‘minor’ procedures, biopsy, collapsed lung, chest drains etc. Then major surgery. The steroids won’t have helped. They are from a very different group to those used by athletes. If I remember correctly, they can impact on muscle mass. That’s where it’s all coming from. That you have ‘bounced back’ as you have is a testament to your underlying reserves. It might not feel as if you’ve bounced, but take it from me, I’ve seen younger people more severely impacted by lesser degrees of physiological insult than you’ve experienced. I can understand your frustration and need to understand, plan and recover. Unfortunately it’s going to take time. It’s going to be about sensible diet, sensible exercise, with, initially, less ambitious goals, and it will come.

Jesus. This really isn’t like last time. I may have survived surgery, but my body is now a shed. I’ve worked so hard to rebuild it after last time and now it’s gone, just like that.

I can’t do this

The next day, we had a meeting with my Oncology team to find out the plan for my ongoing treatment. This was the detail everyone had been asking me for, the questions I’d been fielding for weeks as I didn’t know the answers, yet was so desperate to understand.

What’s your treatment plan? When can I come out and help? Have you got your dates yet? Can you pencil me in for the 23rd? What’s coming next? When are you having chemo? Is it the same as last time?

But when the team ran through the plan with me, it started to hit home that in the state I was, how the hell was I going to fight this with the strength I did before? I was fit last time, I had hardly any side effects, I fought back hard. But this time, I’m on the back foot – my body’s a wreck, how the hell am I going to be fit enough to take chemo again in just three weeks? I’m not… it’s going to be hell… cancer’s calling the shots this time…

So after being Little Miss inspirational, courageous, always look for the up-side since this whole drama kicked-off again, my positivity finally ran out. The next day I was discharged from hospital, but when I left OLVG I was a complete mess.

It started when the nurses came to remove the first half of my staples. I wasn’t prepared – they rocked up with their little staple remover gadget and a bottle of ethanol to keep the wound clean, but I’d just had my breakfast, I wasn’t ready, and I squealed like a child with every staple that came out. It didn’t even hurt. But I was going into panic mode. At the third staple, they called in the doctor, who brought me an anxiety tablet. By this point I was balling my eyes out, screaming that I didn’t want any more f***ing medication. Doc suggested this would help calm me down to get out a few more staples. Fine, I’ll take it – I might as well, I’m taking everything else there is going… I took the tablet, cuddled Bertie, and with tears streaming down my face, let them take a few more staples out.

When Mum & Dad arrived a few minutes later to take me home, the anxiety tablet had kicked in and I just felt numb and drowsy. As I explained what had happened, the numbness started to change to anger, and I said to Dad just get me out of here, take me home, I’m sick of hospitals. And we left. No goodbyes, no pleasantries or thanks to the team who’d cared for me relentlessly; just the start of Boxy going into meltdown.

By the time we got home I was a wreck. Laptop thrown at the wall, phones thrown across the room, thumping furniture, crying, screaming…

It had to come out at some point – I think everyone knew that. Mum and Dad said they were relieved I was finally letting it go. But for me, it was the start of a downhill spiral which, if I’m honest, I’m still not quite out of, despite a few more positive posts on social media here and there.

Becoming a hypochondriac – is this a thing?

Because the brain is the epicentre of everything that happens in your body, I now have this constant question whenever something changes… is this a thing? For example; before and after surgery, one of the checks the Neurologists did was to ask if the sensitivity on my left felt the same as the right – it always did. But ten days after surgery, I started to lose sensitivity in my left Ulnar nerve, which runs down the outside of my arm from my shoulder to my little finger. This is now totally numb. Apparently, it could be a side effect of coming off the steroids too quickly (I’d been pushing to come off the damn steroids as I hate the side effects – swelling, increased appetite, anxiety, mood swings… all the things which are killing my positivity, making me paranoid and panicky on a daily basis).

Apparently, I’m my own worst enemy. I’m too tough on myself, I need to accept that it’s not going to happen overnight, and it’s going to be a long road back. I get all that, really I do. I know I need to recognise each step forward as a win, and I do. Yesterday, I managed to hold a fork in my left hand to steady my food, while I cut it with my knife in my right hand (but then transferred my fork to my right hand to actually eat). Today, I managed to use the fork in my left hand and lift the food into my mouth – a huge win.

But I’m also fixated on the fact that I want to be fit and ready to hit chemo head on again in a few weeks’ time. And while I’m still on the steroids, I’m eating too much, I’m still having anxiety attacks, I’m swollen, bruised and still unable to feel down the outside of my arm (which is making rehab feel slower/harder).

The good thing is that I’m aware of all this and I know it’s all connected. It doesn’t stop me feeling the way I do, but I need to do what I’ve always said and focus on what I can influence. I know I need to stay positive. I want to fight this. And I know I need to give myself a break. But it’s tough. I’m not a machine, however strong I think I am, or I want to be – this is cancer. It’s not an easy fight and I need to accept that. That doesn’t mean I’ll fight it with any less strength or belief than before, it’s just a much tougher ride this time.

Looking forward; after a few days’ R&R in the UK, Mum & Dad and I came back to Amsterdam today. They’re not staying with me now, which means I’m looking after myself and getting back my independence, albeit with them ‘around’ in case I need them.

And I’m updating the blog. I really haven’t felt comfortable, interested, mentally ready to talk or emotionally strong enough to open up about any of this until now. But I’m hopeful that my positivity is coming back. It’s not going to happen overnight but one step at a time…

Just bear with me while I come out of my cave 🙂