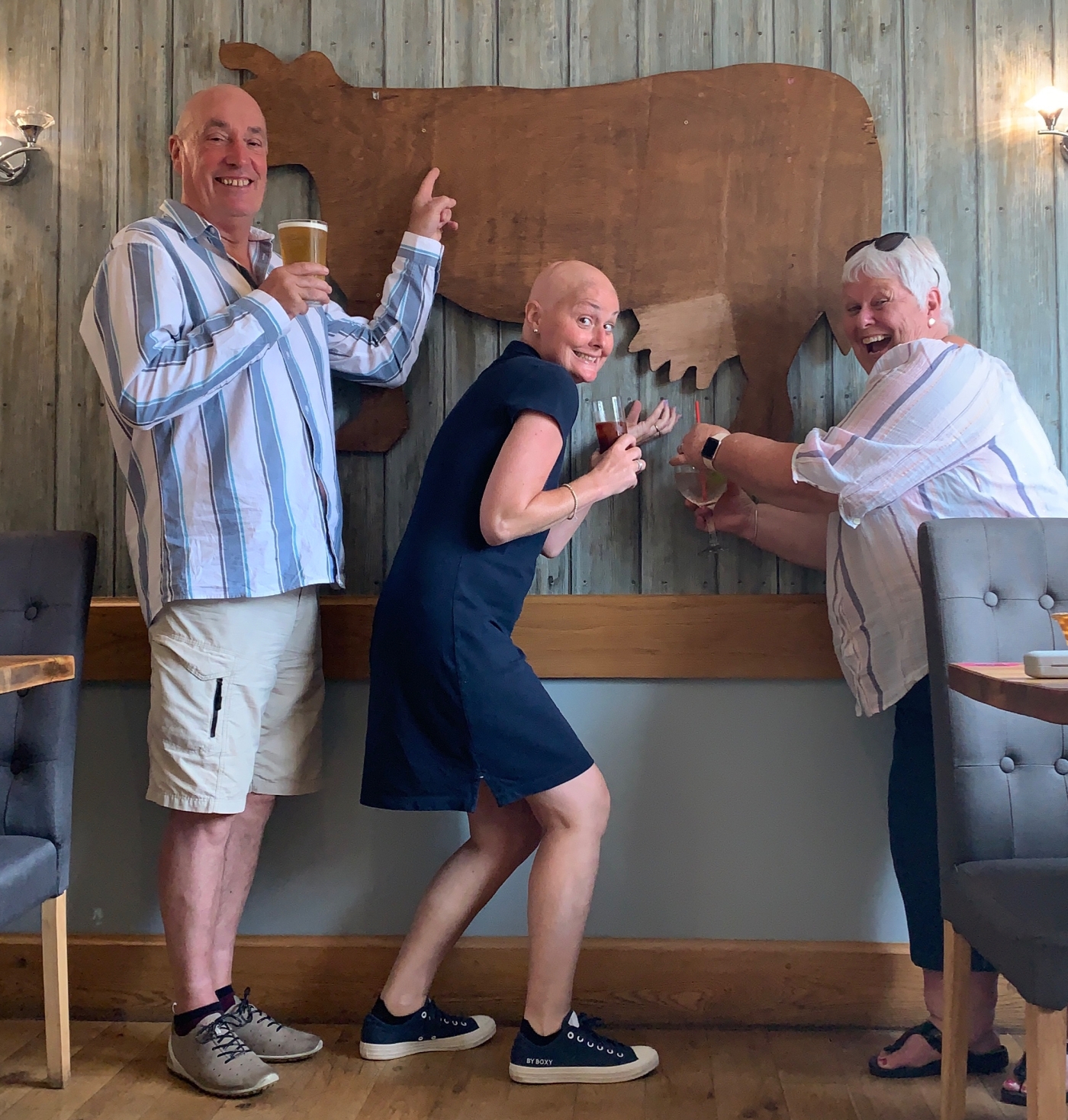 It’s been a while, again, I know. And lots of people have been asking, as always, how am I doing?

Well. That’s the problem – it’s been so up and down, I’ve been reluctant to write, knowing that as soon as I click ‘Publish’ things could feel different, leaving people with the wrong idea. So which is better – giving people an out-of-date update, or no update at all? With my Comms pro hat on, I’d say it’s best to keep people informed, but also that if you can’t guarantee the detail, don’t share it. So where does that leave me…?

In addition to that, I’ve felt at my most alert or clear-minded just before bedtime… the worst time to sit down in front of a screen, right?

So tonight I’m sitting outside typing on my phone, hoping that I can at least get something down as a starter-for-ten! I won’t share everything – much is now old and it’s far too chilly to type for long! But at least it’ll give something of an update.

In Henry Fraser’s book ‘The big little things’ he says that the first thing he had to do was to accept his new ’normal’ life, accept that he couldn’t change it, and then adjust from there, by focusing not on what he couldn’t do any more, but what he could still do. I get this completely, but the difference is that, for Henry, he had an horrific accident which changed his situation. He hit rock bottom and that was what he had to accept. Once he did that, he was able to build upwards. For me, I’ve never hit rock bottom; my condition is constantly changing, so trying to accept rock bottom and build up from there is something I’ve been unable to do.

But being back home with my parents and closer to my family, I’ve spent more time than ever before reminiscing on memories, and that’s helped. I’ve found myself recalling how my grandparents, my Nanny in particular, aged. And how they did it without focusing on what they could no longer do. When Nanny couldn’t get down on her hands and knees to weed the garden, when she struggled to hold the potato peeler, or kept dropping things, when she and Hampa couldn’t travel as much any more – she used to say to me that she’d had a good run, that she was just getting old, it was normal, it’s life. She didn’t complain about it (well not to me, anyway – Hampa probably more the brunt of that for a good few years!) but they just accepted it as life, however frustrating life can be.

And that’s really helped me lately. As I see it; there’s no ‘right’ duration for life – some people do it in 20 years, some in 40, others in 80, others over 100. There’s no definitive or ‘right’ number – so when people say that they lost people “too soon” or “too young” I think it’s relative. It’s what you cram into that time that matters, and I reckon, like my grandparents, I’ve already crammed in more that most people my age. So my life is flipping awesome and, until it ends, whatever happens is just life – it’s ageing, it’s natural, it’s normal, it’s just happening to me at a faster pace than most of my peers.

So when I now look at what I can or can’t do, I look at my grandparents or even my parents (who are ironically experiencing many of the same frustrating things that I am – lower energy, aches and pain, forgetfulness, wobbliness, tiredness, butter-fingers…), and many of these things which previously made me ask “is this the beginning of the end…?” I now see as my body ageing – it’s just happening to me earlier than most. This is starting to help me ‘normalise’ what’s happening to me, and cope better with it, psychologically.

Nailing jelly to a wall

But physically, it’s still a pain. Over the past few years, I’ve learnt the difference between aches and pains, but this is a whole new challenge. Sure, the pain hurts, but how we manage it is a conundrum in itself.

You have pain from the lesions, so you take painkillers to numb it. But every med has side effects, which are uncomfortable, debilitating or limiting, and reduce what you can physically do – you’re constantly knackered, from doing naff all! But exercise gives you strength and helps maintain your energy. So there’s a trade-off: putting up with the pain (so you don’t have the side effects of the meds – getting drowsy, aggravated, bloated, constipation…) versus taking the damn meds to stop the pain and at least get something resembling rest. It’s easy to say ‘listen to your body‘ or ‘take a nap’ or ‘lie on the couch and watch Netflix’, but when sitting down squashes your swollen belly, lying down puts pressure on your lesions, and you want to keep active to stop seizing up and at least get some form of exercise, but you can’t as you’re so exhausted from the pain… what do you do? For me, as a control freak who likes to fathom the detail and understand the ‘why‘ to be able to fix the issue (rather than just plaster over the problem), I’m constantly trying to track when I’m feeling good/bad and identify a pattern. But when every day is different, it’s like trying to nail jelly to a wall! Hence the reluctance to publish an update on the blog.

Now despite finding my Ommmmmm in Rhodes a couple of years back, yoga is now a non-starter. Seriously, I can manage a squat and can balance on one leg, but if dogs, cats or cows are involved, I literally can’t get up off the floor – I can’t even lie down on my front! But the teams at MacMillan, St Leonard’s, Marie Curie, Maggies etc. all seem to rate complementary therapies (albeit slightly different to the ‘alternative’ therapies available in Amsterdam!) So I figured I’d give it a go, and having now tried Tuina reflexology and acupuncture, I’m a convert!

I get an hour’s food massage on a Wednesday afternoon, and Amy comes over on a Friday night and sticks a bunch of needles into my back while we have fish & chips and general Yorkshire banter. Neither is going to kill off the cancer, but they do help with the pain and discomfort, without the side effects of even more medication. I just hope mum doesn’t mistake me for a pin cushion with her sewing bee antics…!

On 6th May, I was told I could have as little as two weeks to live, hence I decided not to opt for systemic treatment (ie surgery) to keep trying to kill the disease, but instead to move back to Blighty and focus on ‘palliative’ care, and make whatever time I have left as enjoyable and comfortable as it can be. That was 17 weeks ago.

On the downside, when I moved back to Blighty I massively downsized, got rid of all my winter clothes and spent money like it was going out of fashion. In return, the UK ‘summer’ has been and gone and I’m now sitting in the garden wrapped in blankets, a hat and fleece! My friends are all saying they want to come and see me (thinking they may never see me again) and, at times, it feels a bit like people are queueing up to pay their last respects – when I haven’t even gone yet?!

But on the upside, it’s giving me a good excuse to catch up with people and, for as long as I can, I’m still doing things which make me happy. It may not be travel, training or drinking margarita by the liter; but a coffee by the fire, a drive to the coast, or even housework (yes, housework!) reminds me that I can still do more than I expected to be able to do, when I made the decision to move back in May.

Clinically, I’ve not closed the door on systemic treatment either. Deciding not to go for surgery and focus on palliative care was tough and I had a huge mental battle about it – stopping treatment felt like giving up on life, but eventually I realized that I wasn’t giving up on life, I was focusing on making it better.

So whilst the palliative team are now helping me with things like pain management and complementary therapy, I’m still working with the medical team, both here and in Amsterdam, to treat the symptoms we can, whilst staying open to systemic options to tackle the bigger picture, if such options are feasible, relevant and available.

This week, I’m having radiation on my hip again (who knew sitting on the loo could be uncomfortable?!) and also on my back (so I can lie down and sleep properly without having to knock myself out with meds). The latter is a delicate one, as I’ve already had so much radiation on or around my lungs, but the side effects of this can take a while to show, by which time anything could happen. So I’m going for it, in the hope that radiation will at least reduce the pain a bit, so I can lower the meds, have fewer side effects, feel less exhausted from managing the pain, and have more energy to do things that make me happy. We know there’s still a Dastardly posse partying in my brain and a Mutley crew around my left lung. But we’re focusing on what we can influence, and even if this just gives me a few more weeks, that’s a few more weeks I can enjoy my car, coffee, catch-ups, coastal views and (dare I say it) cleaning!

So to answer the question “how am I doing”…

AN – obviously, tomorrow morning I might wake up and feel like shit! But I’ll derail with that if it happens 🙂