So this post has been on my mind for a while, but I’ve been afraid to actually write it, because despite what people have said about my writing, this one’s about my family, and I’m honestly not sure I can do them justice.

But it’s about time I tried…

So how are Mum & Dad doing?

Lots of you have been asking, and I love that. They’re going through this just as much as I am, but they’re also incredibly strong (far more so than me!) and whilst they say they don’t really know what to do to help, they couldn’t possibly do anything more.

So let’s start from the start. On August 17th, they basically put their lives on hold, dropped everything back in the UK, threw a few outfits in a case, booked the first ferry to the Netherlands, and arrived in an Amsterdam hospital 36 hours later to find their daughter paralysed down her left side, unable to walk unaided, and frightened to death of what was happening to her.

They took up residence in my apartment and their car took up residence in my garage. Mum cooked, cleaned, washed and ironed the three outfits they’d brought with them. Dad went to Albert Heijn for daily supplies. And they gradually morphed into a Dutch way of living… they actually started to enjoy it so much, I was convinced I was going to come home to find they’d changed the locks on my pad! Joking aside; for the next three weeks, they simply rocked up at hospital just to be there beside me. They had no idea what to do. At first, they watched me laugh, joke and play my positive vibe, same as you guys did from the outside – focus on what you can influence… celebrate the little things… there’s always someone worse off… we got this… buy a bigger bucket… yada yada yada… But as things deteriorated, they saw and shared the shit – the frustration of constant waiting, the questions, the unknowns, and of course the stress of brain surgery.

Brain surgery is never easy. But when you’ve already seen your son go into it and not come out the other side… seeing your daughter go into it…? To me, the connection was unavoidable and I just can’t comprehend how my parents managed that. But they did. When I asked Dad, he said “it’s just something you do – not just as a parent, but as a family” and to me, that’s what makes them incredible. But more on the family later – there’s MUCH more to share about Bid & Bod first…

So first-up, my Dad. Now Papa Bok is great at doing stuff. If you give him a job to do – pop to the shop, put up a shelf, go for coffees – he just cracks on. But in the past few weeks, I’ve realised that when he’s not doing something, he’s looking for something to do – he’s what my old L&D colleagues would call a ‘lifelong learner’.

In some cases, this is quite handy – he can now locate pretty much anything in Albert Heijn, where the layout of every store is different and things are generally in random places – for instance, puff pastry is with ready meals? #gofigure.

Sometimes, it’s entertaining – while I was in hospital, I don’t think he actually took the same route twice between the car park and the ward, or went to the same place twice for coffee? Instead, he’d go off exploring, then just reappear and explain to Mum and I how he’d found a new staircase, got lost in the lift system (as they don’t all go to the same floors you know) or discovered another café or coffee machine, which must be just for the staff, as it’s only a Euro a cup, but it’s not as good as the coffee you get from the machine on level two… oh and he’d tell us again ten minutes later, having forgotten he’d told us ten minutes before…

And sometimes it’s just random – when we were waiting around in hospital, Mum on her kindle, me on my laptop, Dad on his iPad… he’d suddenly pipe-up with some random general knowledge – testing us on GCSE questions, updating us on who’s featuring on BBC Introducing, sharing the latest from the F1…

But it’s also adorable – like how he’s taken to Instagram and is now curating stories and photos with comments, effects, hashtags… or how he’s been using my bike and has totally adopted Dutch cycling etiquette – bell usage and all! 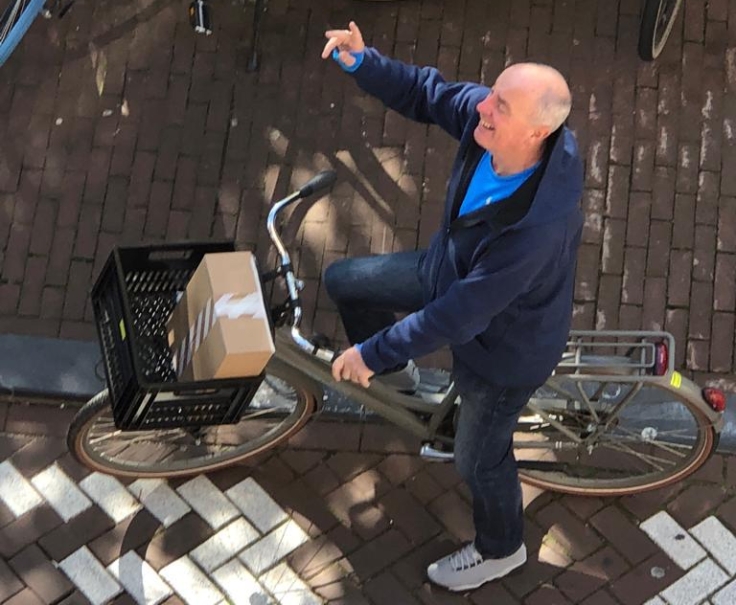 In short; my Papa is one of the most humble yet incredible people I know. He’s getting more like his father every day, much to the amusement of the rest of the family, but just like Hampa, whether he’s being handy, entertaining, random or just adorable, he’s my absolute hero and I love him to bits xx

Mama Bok – the patience of a saint

And then there’s my Mum. Mama Bok and I have never had your typical mother/daughter relationship. She says I’m like my Dad, I’ve always been closer to my Dad, I do more with my Dad and I’m generally blind to (read as: ignore) his faults. And Mum’s had to put up with this for the past 40 odd years; being teased, wound up, and taken the piss out for her ‘mumisms’. Sure, she plays the “you never ask me” or “oh so I’m not invited, again” lines, but she lets us get away with murder because she loves the close relationship we have.

But on the couple of occasions where the shit in my world has really hit the fan, it’s actually been Mum who’s been my rock. Maybe that’s just me growing up, or maybe she’s just really good at the tougher stuff? Well this is clearly tougher stuff and in the past few weeks, rather than clash or argue, I’ve been amazed how we haven’t fallen out, instead I’ve realised that my Mum actually has the patience of a flipping Saint.

Firstly, living with my Dad. His handiness, randomness, entertainment, adorability… yay! The repetition, snoring, farting, speaking with his mouth full, sneezing louder that anyone, at least six times, usually followed by a coughing fit, and topped-off with a burp…. WTF? I’d have gone nuts by now, yet Mum just rolls her eyes and sometimes even does the “Ahhhh bless him” thing!? After nearly 50 years, how on earth is she still sane?!

And then there’s putting up with me. She gets demoted to the back seat of the car, lets me scoff all the mints in the glovebox, and never complains when I dictate what I want to do each day. While I was in hospital, we set up shared notes on iCloud, and every night I’d update it with stuff I wanted her to bring in for me – fresh juice, food, clothes, cuddly toys… I’d tell her where they were in my apartment, she’d go hunt them out and bring them in for me the next day. Waiting around in the hospital or hanging around my apartment, she’d just be content reading her kindle or updating Facebook, again… But when I wanted to go to the café for coffee, she’d push me in the wheelchair. We’d get to the café and I’d get into a flap because I couldn’t decide what cake I wanted, she’d offer to split with me so I didn’t have to choose (as long as one was always a coconut macaroon, obvs). And when I had a meltdown, she’d let me vent my frustration, not try to calm me down, then just cuddle me and remind me of the positive things, the little things that matter…

And throughout all this, she’s never complained. She’s just got on with it and done what she thinks is best. And when she hasn’t known what’s best, she’s just tried to do something, or nothing. Or whatever I’ve needed her to do. She has a heart of gold and however much of a Daddy’s girl I am and always will be; Mum – you are my rock xx

Keeping us all going

But in truth, there’s more to it than that. At the start of this post, I said that Dad described what he and Mum have done as something you do as a family, not just a parent. And in fairness, whilst Mum and Dad dropped everything and came over to Amsterdam, in the background, our family have been keeping the three of us going.

When this all kicked-off again, they were naturally worried for me, and wanted to know what they could do to support us, and I said just keep things as normal as possible. The thing is, my family is rarely ‘normal…

So there’s basically one tell – we know (and find any opportunity to quote) Inspector Clouseau, Fawlty Towers, Monty Python, and various other Milliganesque-type comedy sketches, despite many of us being born years after said content was written. I remember my cousin Tom sitting at the dining table shouting, “Free Maria Gambrelli!” – he was three. Even his girlfriend, Amy, has had to watch (and learn) the films, scripts, quotes and just accept the endless re-enactments…

So we’ve had an endless stream of gifs, photos and YouTube clips coming through… just keeping things normal… 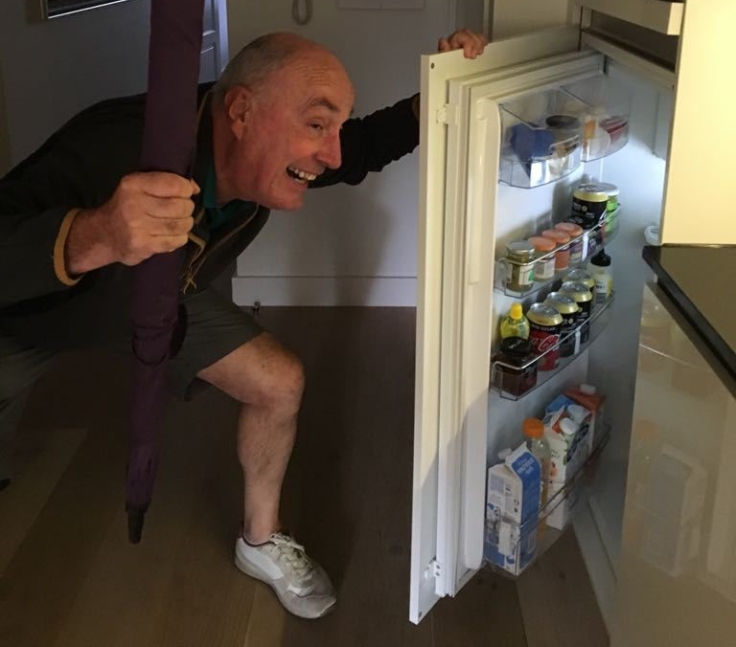 I said at the top, that I wasn’t sure I could do them justice in this post. I’m also conscious that my recovery isn’t just physical – the cognitive side of my brain is also trying to recover. So things take longer to process, I find it harder to articulate how I feel, and I’m much less confident of my output.

But this one is important. My family means everything to me and they don’t deserve any of this, no-one does. But how they’re dealing with it, how they’re helping me deal with it, and how they’re just keeping us all going… I don’t think I could ever really put that into words, brain surgery or no brain surgery! And I hope that comes across… xx